El efecto Mariel: Before, During, and After 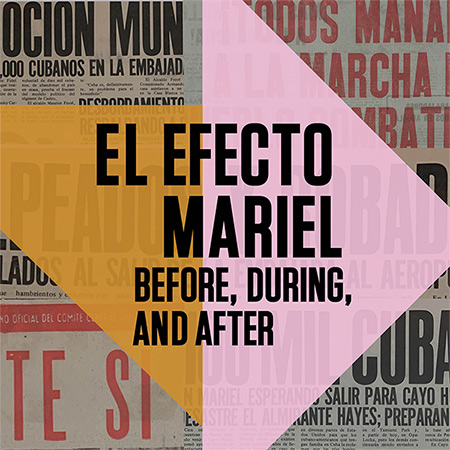 El efecto Mariel: Before, During, and After, is a year-long, multi-prong program comprising a series of webinars, as well as live film streamings, informal talks, oral histories, and exhibition projects organized by the Cuban Heritage Collection at the University of Miami Libraries. The program takes an interdisciplinary approach to studying anew the antecedents, unfolding, and aftermath of the Mariel boatlift of 1980 upon its 40th anniversary. By bringing together multiple perspectives on this historic event, the series aims to frame Mariel, not in the past, but in the present, underscoring its enduring relevance and legacies.

The arrival of over 125,000 Cubans to the coasts of South Florida in the span of a few months in 1980 had long-lasting social, racial, economic, and cultural consequences in Miami and beyond. Among the central topics addressed throughout this series are the historical and political factors from the late 1970s-both in Cuba and in the exile community-that led to this unprecedented refugee crisis, the Cuban exile community’s response to this new influx of Cuban refugees, the social and racial tensions that ensued in South Florida in the wake of the boatlift, Mariel’s impact on immigration policies, the role of the media in covering Mariel, and the significant impact of the Mariel generation in Cuban diasporic cultural production.

To learn more about the history and legacy of the Mariel Boatlift, visit our Research Guide.

Contribute to a special edition of Anthurium: A Caribbean Studies Journal – Mariel @ 40, November 2021

Submissions may include scholarly essays, research articles, personal narratives, creative writing, interviews, and oral histories or commentaries. Digital Humanities and/or web-based publications/projects are welcomed. Submissions should focus on any aspect of the Mariel Boatlift’s impact on the communities of Greater Cuba.

For more information, please review the Call for Papers or contact Lillian Manzor at lmanzor@miami.edu or Mike Bustamante at mbustama@fiu.edu

See all the recordings 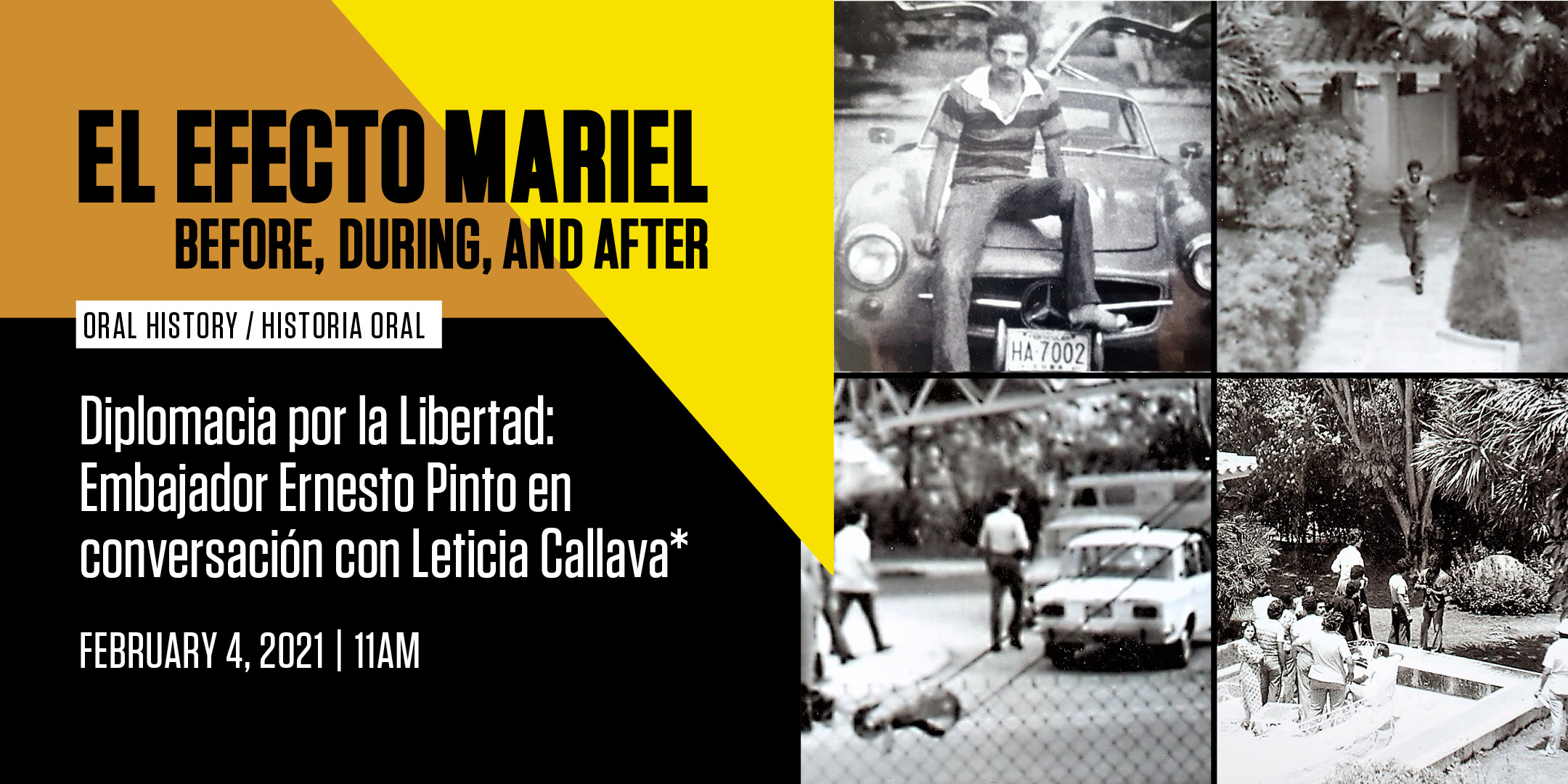 During the first days of the month in April of 1980, over 10,000 Cubans stormed the compound of the Peruvian Embassy in Havana seeking political asylum, unleashing what would become known as the Mariel Boatlift—the massive exodus of over 125,000 Cuban migrants from the port of Mariel to the shores of South Florida. At the center of these dramatic events emerged a key figure—Ambassador Ernesto Pinto-Bazurco Ritter—then diplomatic envoy in Havana for the Peruvian government.

This is a unique opportunity to hear a first-hand account from the Ambassador of the events leading up to the crisis, as well as the details about his negotiations with Fidel Castro, the Carter administration, and the Peruvian government during the days and weeks that followed. We will also learn about how this experience impacted Ambassador Pinto’s career as a diplomat, as well as his personal life. 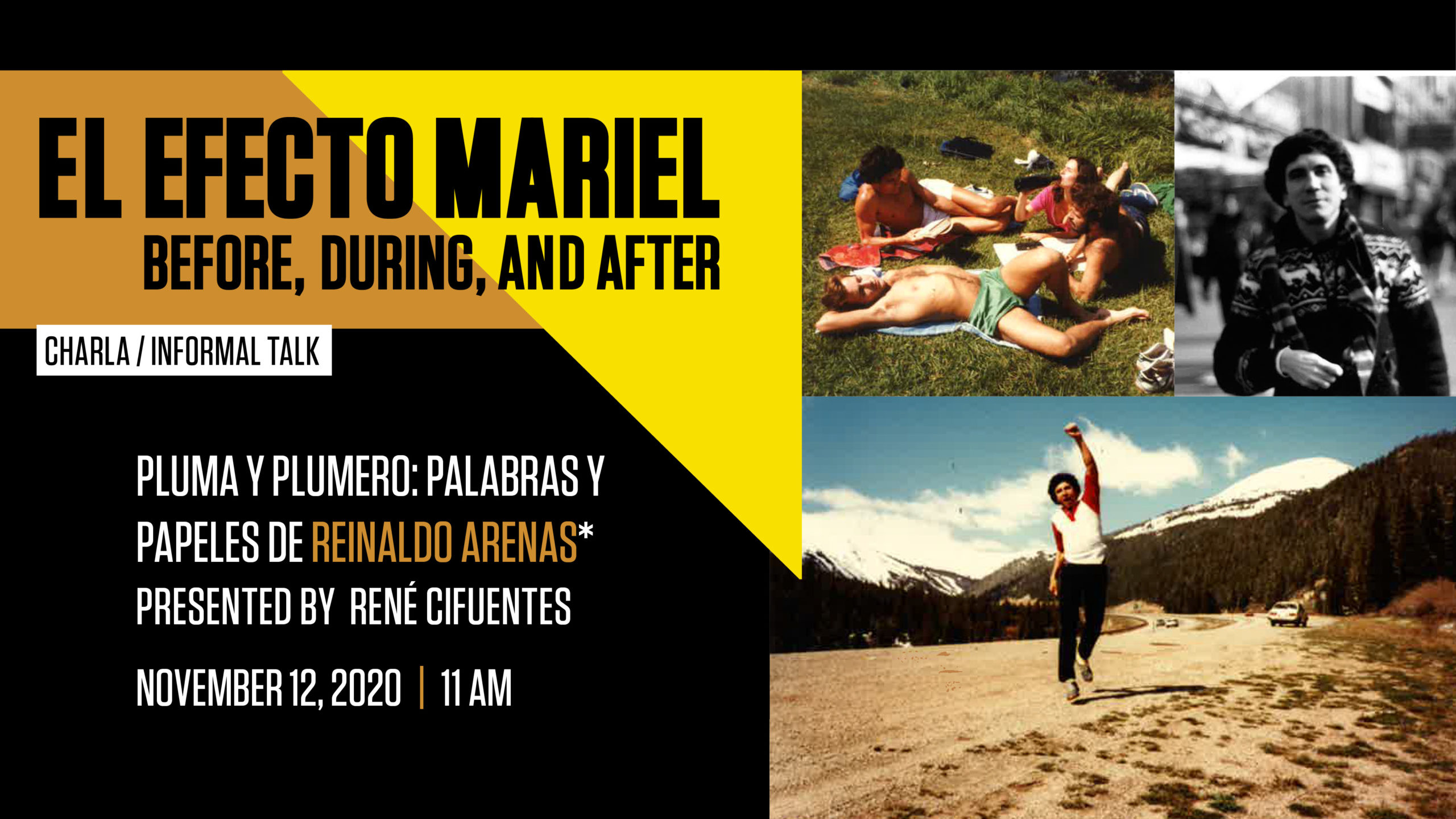 Upon their arrival as refugees in New York in 1980, Reinaldo Arenas and René Cifuentes formed an intimate and playful friendship that would last through the writer’s final years. During that time, the two collaborated on multiple projects, including founding Mariel magazine. In his talk, Cifuentes attempts to explain this friendship, which is expansively documented with photos, telephone recordings, notes and postcards, now in the Cuban Heritage Collection, in commemoration of the 40th anniversary of the Mariel exodus and the 30 years since the loss of Reinaldo Arenas.

The Mariel Effect: Social and Racial Tensions in South Florida in the Wake of the Boatlift 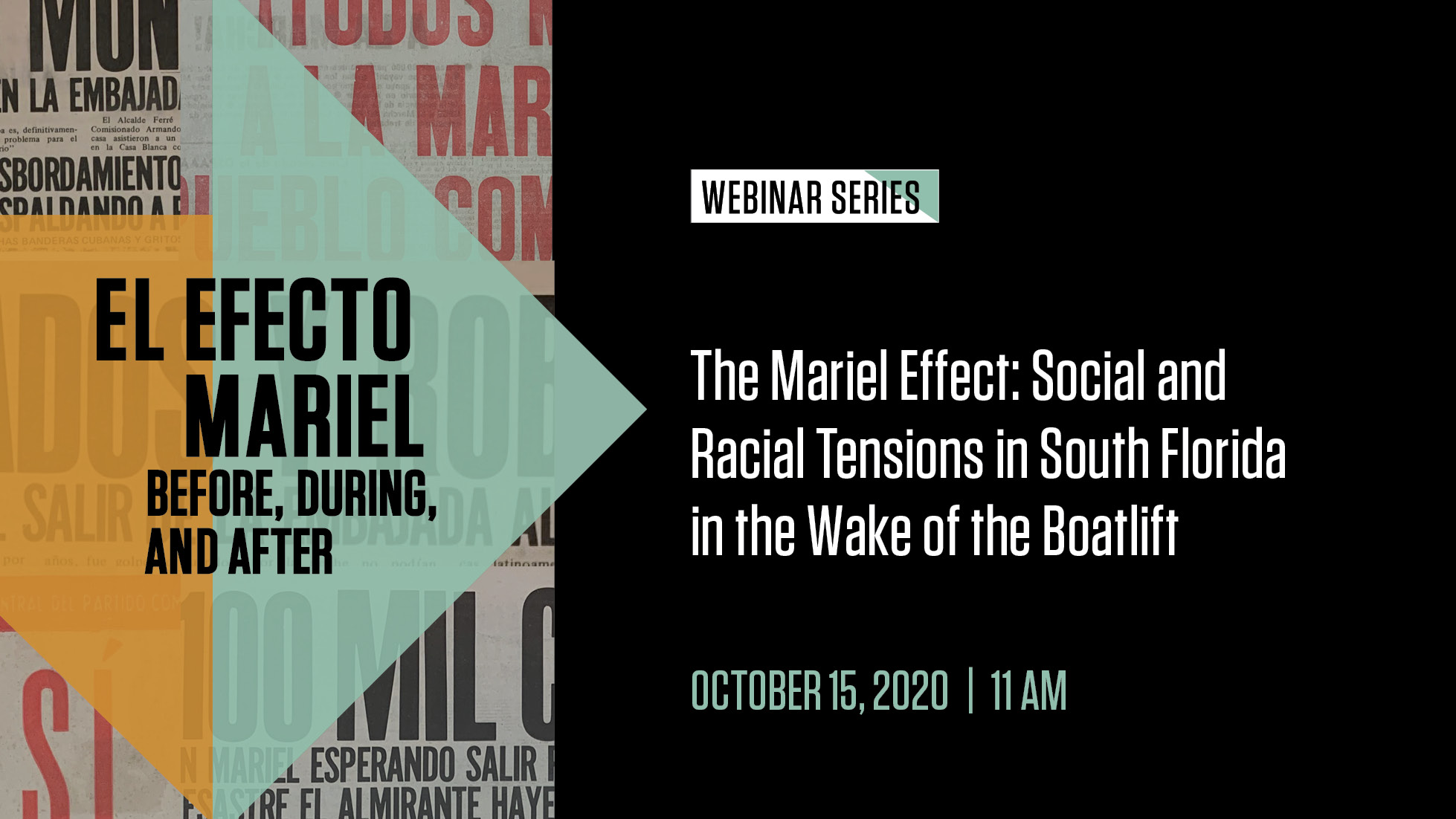 The arrival of 125,000 Cubans from the Port of Mariel to South Florida beginning in April 1980 coincided with a particularly volatile period in Miami. The killing of Arthur McDuffie—an unarmed Black man—by White and Latino police officers who were later acquitted, exacerbated deeply rooted tensions in race relations among African Americans, Whites, and Latinos (primarily Cubans) in Miami. At the same time, the new influx of Cuban refugees was associated with another crisis: the HIV/AIDS epidemic. Three distinct voices representing recent scholarship will address the complicated ways in which issues around race and gender played out post-Mariel during the 1980s and continue to shape Miami today. 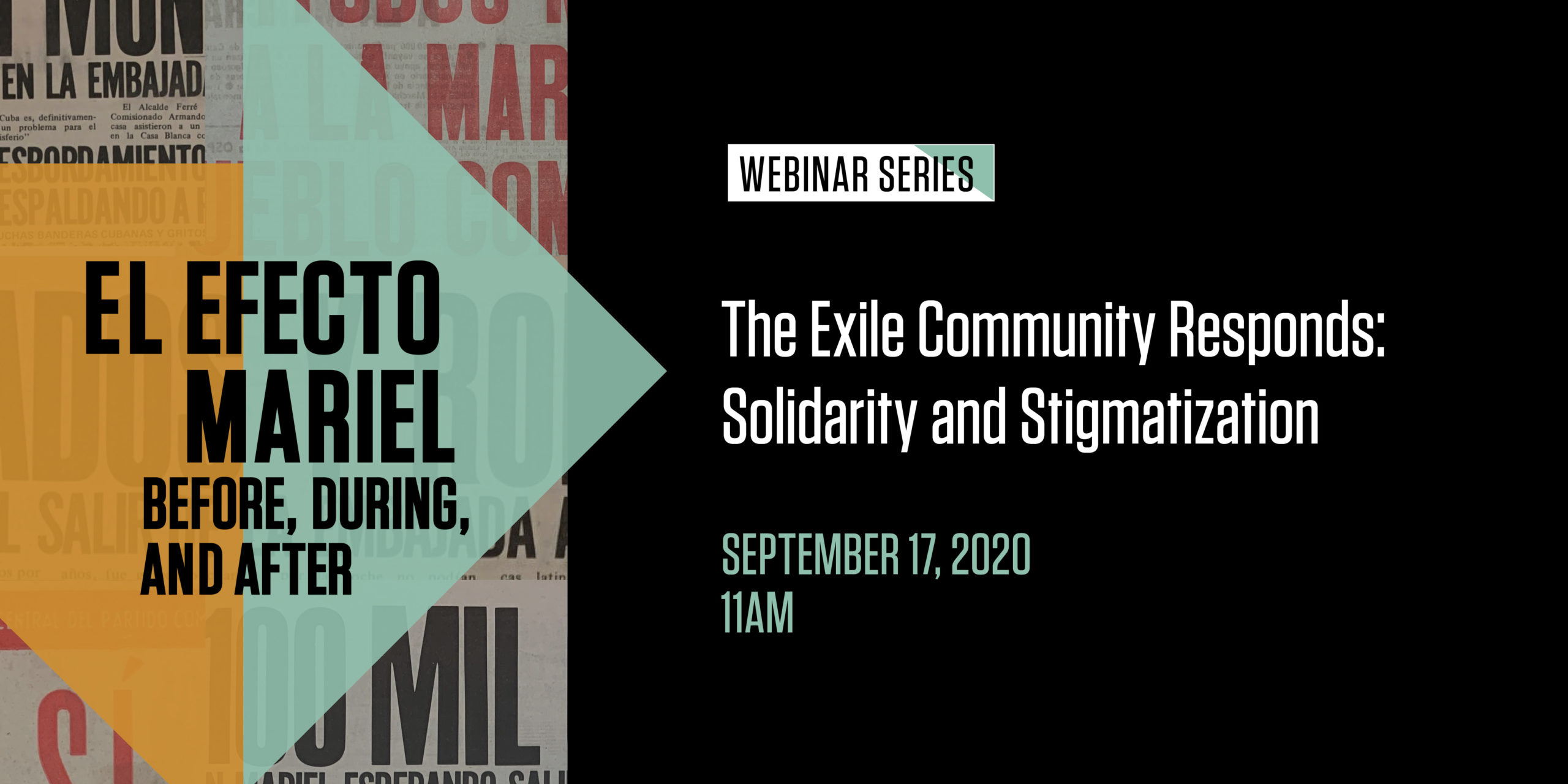 By 1980, Miami’s Cuban community, made up of refugees and exiles who arrived in South Florida in the 1960s and early 1970s, had begun to garner significant economic and political power locally. These early  Cuban immigrants—many of whom are informally known today as el exilio histórico, or the historic exile community—were in many ways a monolithic group, i.e. mostly white, Catholic, socially and  politically conservative, and hailing from the island’s pre-revolutionary professional and middle classes. That demographic and cultural picture changed considerably when beginning in April of 1980, and over the span of only a few months, more than 125,000 new refugees arrived on the shores of South Florida after fleeing the island via the Port of Mariel.

How did the established Cuban community in Miami respond to this new influx of Cuban refugees who were more racially and culturally diverse, and whose experiences on the island were in many ways quite different? This panel explores how the newly arrived Cubans (Marielitos) were greeted with an outpouring of support, on the one hand, and increasingly with deep suspicions (especially along lines of class and race), on the other. Panelists will further explore how Mariel migrants settling in Miami added new complications to the city’s already fraught inter- and intra-ethnic dynamics. For that reason, the story of their early reception in the United States, like the story of their migration as a whole, is arguably one that resists easy moral lessons.

The Boatlift Unfolds: Perspectives from Both Sides of the Florida Straits 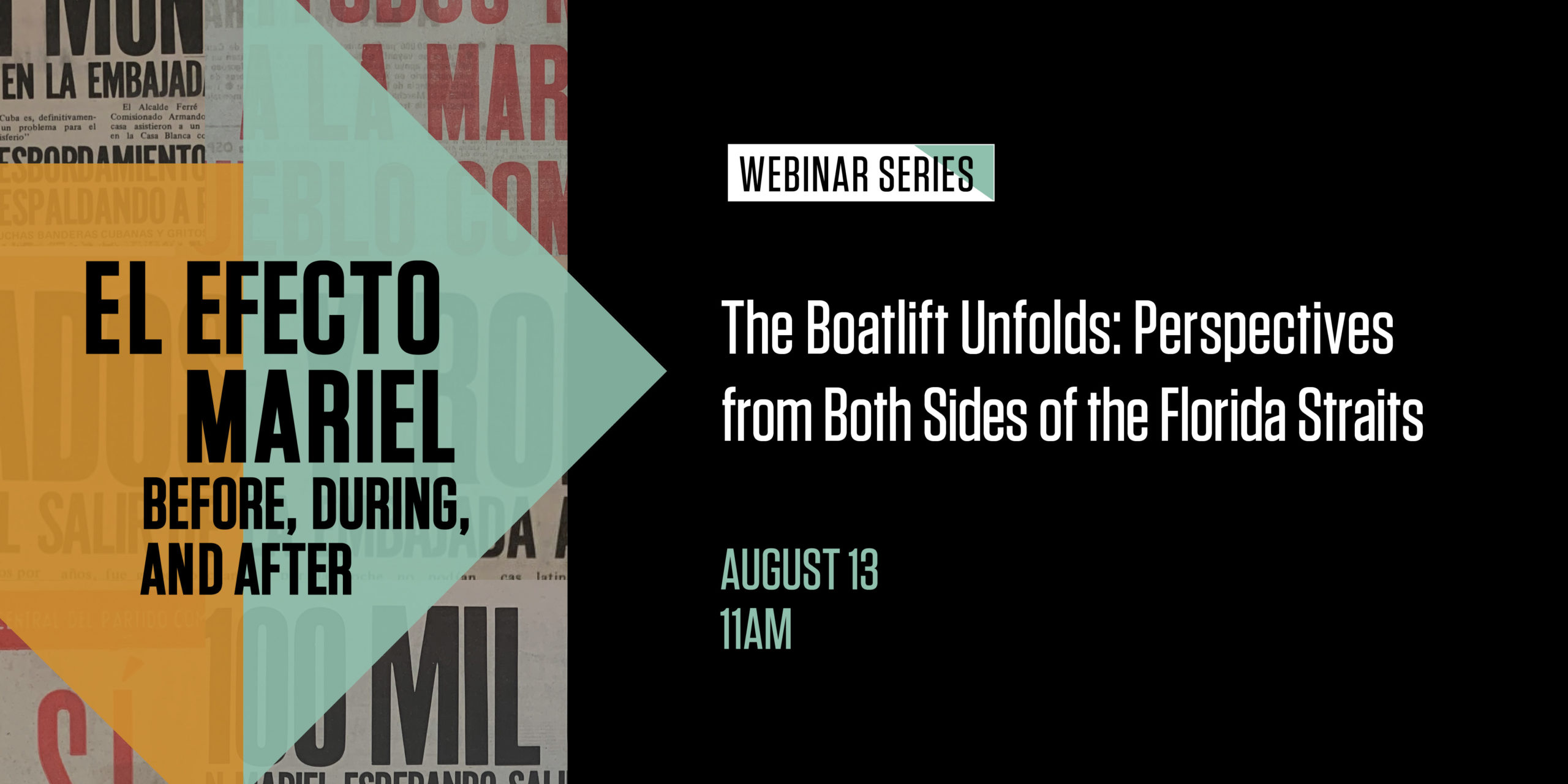 The Boatlift Unfolds: Perspectives from Both Sides of the Florida Straits, the second in our series of webinars and virtual programs addressing the antecedents, unfolding, and aftermath of the 1980 Mariel boatlift. In this event, panelists will offer unique perspectives on the unfolding of the Mariel crisis itself—from its beginnings at the Peruvian embassy in Havana, to the arrival and detention of many Mariel migrants on far flung military bases across the United States. We will also hear detailed accounts of the mass rallies and “acts of repudiation” carried out in Cuba to denounce those choosing to depart, and we will explore how race and racism fed into these practices of internal stigmatization. Ironically, the denigration of Mariel migrants in Cuba would mirror the ways some would see and treat them in the United States.

Antecedents to the Mariel Boatlift in Cuba and Cuban-America 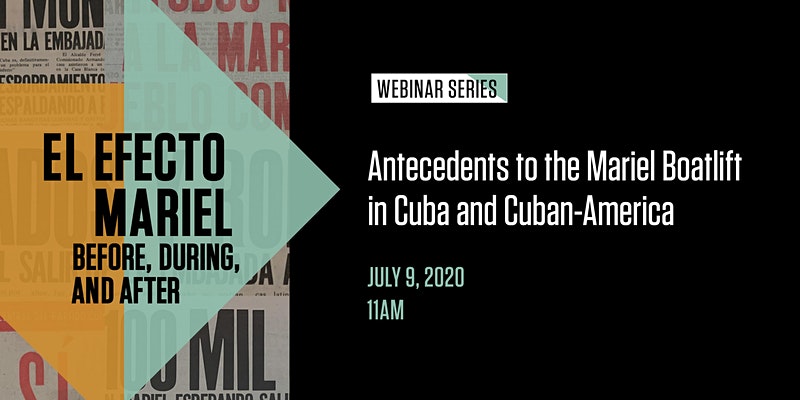 Antecedents to the Mariel Boatlift in Cuba and Cuban America launches a yearlong Mariel program, El efecto Mariel: Before, During, and After, and inaugurates the CHC’s first webinar series. In this program, panelists will examine the historical, ideological, economic, socio-cultural, political, as well as personal factors that framed the 1970s, both in Cuba and in the Cuban exile community, leading up to the boatlift in 1980.

About Mariel Stories: Members of the community are encouraged to share their personal  memories, stories, and reflections related to the Mariel boatlift of 1980. Stories will be collected virtually on a rolling basis and a series of prompts give participants ideas from where they can begin their story. Submitted stories will become part of the permanent collections of the Cuban Heritage Collection and the HistoryMiami Museum and featured on both online platforms.