The Cuban Heritage Collection at the University of Miami collects, preserves, and provides access to primary and secondary sources of enduring historical, research, and artifactual value that relate to Cuba and the Cuban diaspora from colonial times to the present. The Collection supports the teaching, learning, and research needs of the University of Miami and the broader scholarly community. The work of the Collection focuses on the following five programmatic areas:

History of the Cuban Heritage Collection

Cuban materials were located throughout the University of Miami’s Otto G. Richter Library, which was dedicated in 1962 and included a reserve collection of Cuban books. The quality of the materials in the collection during the early years of the Library reflects the knowledge and talents of Charles Lewis Morgan, who was head of acquisitions, and J. Riis Owre, Dean of the Graduate School and one of the founders of the University’s Pan-American Institute in 1927.

In the 1960s, Library Director Archie L. McNeal hired two exiled Cuban librarians, Rosa M. Abella and Ana Rosa Núñez. Supporting their quest to collect Cuban materials and document the Cuban experience in exile, he became the first of several library directors to recognize the unique asset this represented to a research institution. With the growing acquisition not only of books but also of periodicals, maps, posters, photographs, and other materials, the library’s Archives and Special Collections Department established the Cuban Collection in 1980 with Esperanza Bravo de Varona as its archivist. Members of Miami’s Cuban community recognized the uniqueness of the Cuban Collection and in 1995 formed the Amigos, a membership group that raises funds to support the collection’s mission.

The collections documenting Cuba and the Cuban diaspora expanded to become the most important body of resources on these topics outside the island. In 1998 the vast and growing collections were brought together as the Cuban Heritage Collection.

Thanks to a $2.5 million challenge grant from The Goizueta Foundation and additional support from the late Elena Díaz-Versón Amos and the Fanjul Family, the 10,000-square-foot Roberto C. Goizueta Pavilion was inaugurated on January 28, 2003, as a permanent home for the Collection.

In 2005 the University of Miami Libraries received an anonymous gift of $1.5 million to endow the Esperanza Bravo de Varona Chair of the Cuban Heritage Collection, in honor of Professor Esperanza B. de Varona, a key force in building the Collection.

The Goizueta Foundation again gave its support in 2009 with a five-year grant of $2.4 million to support collection development, preservation and access, digitization, and fellowship programs at the Cuban Heritage Collection.

In 2019, the University of Miami officially recognized the hard work of the five visionary women who were instrumental in the founding the CHC: Rosita Abella, Esperanza Bravo de Varona, Lesbia de Varona, Ana Rosa Nuñez, and Gladys Gómez Rossié. Their legacy was celebrated at a beautiful reception; Nuestra Herencia: Honoring the Founding Women of the Cuban Heritage Collection hosted by President Julio Frenk and Dean of Libraries, Charles Eckman. 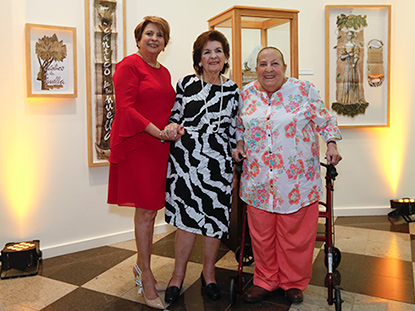 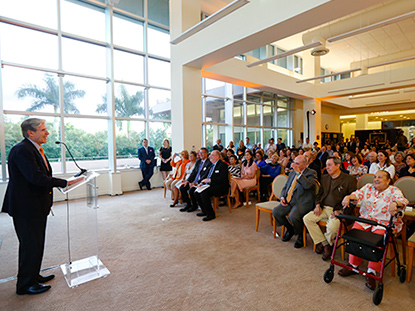 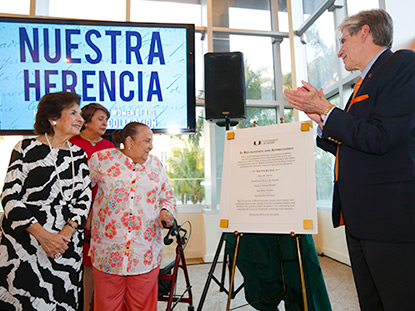